Kaizen, a Japanese term meaning “continuous improvement,” is a philosophy that many of the world’s most successful manufacturers utilize as the driving force behind innovation and technological breakthrough. The spirit of kaizen has been the foundation for Current Technology’s ongoing product development since the company’s inception in 1971. Dedication to continuous improvement led to the development of Current Technology’s exclusive Electronic Grade Panelboard® (the first-ever combination of surge suppression and filtering within a standard panelboard), industry-first MasterPLAN® facility-wide network of power protection, the one-of-a-kind GuardBus™ and ControlGuard™ for busway-fed and motor control center-fed electric loads, and other successful products. Now, the kaizen process has yielded the TVSS industry’s most significant breakthrough of the decade: the Failure-Free ISB™ (Integrated Suppression Bus). The “heart” of Current Technology’s new TransGuard™ and selenium-enhanced SELect™ suppression filter systems, the Failure-Free ISB boasts a suppression filter assembly design that is dramatically different from any surge protection device ever manufactured and far superior to any competing technology in the marketplace. Once again, Current Technology has distanced itself from the competition with a revolutionary, industry-changing breakthrough approach to power protection.

Why the change?
As mentioned above, Current Technology’s power protection philosophy has always been one of continuous improvement. The company’s “Generation III” SF and Plus products, introduced in August 1996, fulfilled this goal within the limits of available technology. However, based upon limitations of available fusing technology, Generation III products contained a replaceable fusing system. (See Current Engineering publication “Failure-Free ISB Fusing: Why It’s the Industry’s Best”.) Simply put, fuse manufacturers could not produce a fuse that met the performance specifications of TVSS products.

Frustrated by the inability of major fuse manufacturers to engineer a fuse that would withstand TVSS requirements, Current Technology set out to design its own high-performance fuse in the company’s research and development labs. And as is the case in many R&D efforts, other challenges were presented and ultimately solved during the arduous, time-consuming process. The net result is Current Technology’s new Failure-Free ISB – not just a repackaging job, but instead, a true breakthrough in suppression filter technology.

Design Focus
The goal was to develop an effective fusing topology that would provide the ultimate in product performance while maintaining the highest level of product safety. The first design hurdle was to devise a method of connectivity that ensured individual fusing for each component without the introduction of sacrificial failure modes. It is common knowledge that printed circuit boards (PCBs) and their mounted components are often the fragile element that causes electronics to require surge suppression. Whether they are located in computers, industrial automation equipment, broadcast systems, point-of-sale equipment or even the appliances in our homes, when the product or system containing PCBs ceases operation, there is often a “smoked board” that can be identified as the cause of failure.

Knowing that printed circuit boards and their delicate components are the ultimate weak link in many electronic product designs, would it be sensible to expose them to large magnitude transients in a TVSS design? Current Technology’s Failure-Free ISB utilizes a multi-layered fiberglass circuit board to serve as a mounting surface for suppression, filtering and monitoring components. To ensure operational integrity (i.e., performance and reliability), no full magnitude surge current is ever introduced onto any electrical trace of the Failure-Free ISB’s multi-layered fiberglass board.

Copper Bussing: Lower Impedance – Improved Performance
Bolted directly to the layered mounting boards are solid copper collector bus bars that permit the full magnitude transient current to flow. By diverting large, damaging currents away from the boards, traces are eliminated as possible weak links. As part of the research and design effort, Current Technology conducted testing at independent testing laboratories on a printed circuit board that, when populated, would become a Failure-Free ISB mounting board. The right side of the board was a raw circuit board trace; the left was an identical trace with the addition of the copper collector bus bar. Both conduction surfaces were subjected to a transient impulse of 200,000 amps (8×20µs) to determine how each reacted to such a large surge current magnitude.

The right side of the photo in Figure 1 below shows the results of subjecting the raw printed circuit board trace, without copper bussing, to a 200,000 amp transient current. It is apparent from the photo (and test measurements confirm) that all copper etching originally contained on the printed circuit board, in the surge current path, had vaporized.

The left half of the photo shows the circuit board enhanced with copper bus bars. Subjected to the same transient current (200,000 amps), the board survives the full magnitude transient current without failure or degradation to the printed circuit board or any other element. It is obvious that the addition of copper bussing significantly increases the surge current handling capability of the board – thereby delivering extended reliability and performance. 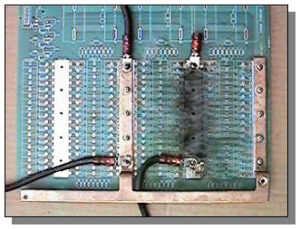 Left half of the photo shows a printed circuit board with the addition of copper bussing. No damage or failure is noted after applying a transient current of 200,000 amps. The right half of the photo shows, once again, a raw printed circuit board trace with no copper bussing after receiving an identical 200,000 amp impulse. Note the obvious failure.

The copper bussing also eliminates the need for any wire within the transient path. By eliminating wire, impedance is reduced and suppression filter system performance is increased.

Internal Component Fusing: Achieving the “Impossible”
Attempting to create a fuse that will survive large magnitude transients without operation yet open instantly under fault conditions is a difficult task that challenges the fundamental principles of fuse operation. The primary reason for fusing within a TVSS device is safety. Should any component fail, the failure should be removed from the circuit and prohibited from affecting the distribution system. (Once again, see Current Engineering publication “Failure-Free ISB Fusing: Why It’s the Industry’s Best” for additional information.)

Using phase “A” for the purpose of illustration, we see that current flows into the suppression filter system on the phase “A” bus where it is then split through equal impedance fuse paths as shown in Figure 3 below. Assuming that a circuit is comprised of eight (8) MOVs (eight fuse elements), each fuse element as well as each MOV will be subjected to 1/8th of the total current magnitude.

Using 10,000 amp transient rated MOVs, the design goal is to ensure that no individual MOV is ever subjected to more than its 10,000 amp capacity. If more than 10,000 amps are delivered to a single MOV, that component could possibly fail. Ensuring that component failure does not occur is a function of proper product application as well as product design. Knowing that the rating of each MOV is 10,000 amps, each respective fuse has been designed to survive transient current magnitudes in excess of 10,000 amps each. This is to ensure that the fuse does not open during a rated transient.

Completing the circuit path between the fuse and its respective MOV is a highly dense printed circuit board conductor. In order to eliminate the board from being a failure point, the current density capability of the printed circuit board conductor is much greater than the current it will ever be subjected to. Also remember that this trace is only being subjected to a proportional share of the total transient current, and that the ISB design relies on the integral copper collector busses to carry the full magnitude transient current.

Monitoring – a mind of its own
In addition to the safety and performance advantages the new Failure-Free ISB fusing offers, it also provides today’s mission-critical applications with increased suppression filter system monitoring capability. By measuring the status of each and every fuse element, Current Technology’s exclusive MasterMIND™ enables the user to easily obtain instantaneous, real-time product performance information, including available protection on-line as well as the percent of protection remaining. Additionally, the ability to measure and record power quality anomalies such as surges, sags, swells and outages make Mastermind a powerful analytical tool. No other TVSS manufacturer offers comparable monitoring capability.

Test Data: Living Proof of Failure-Free ISB Superiority
Claims made by TVSS manufacturers are virtually meaningless without certified proof. Current Technology backs up all performance claims with certified, substantiated test data compiled at independent test laboratories as well as via KeyTek E-Class testing in Current Technology’s on-site laboratories. Before purchasing or specifying TVSS protection, engineers and end-users are encouraged to request test data from all manufacturers. Comparison of like products will conclusively illustrate the superior performance and reliability delivered by the Failure-Free ISB, the heart of Current Technology’s new Select and TransGuard product lines.